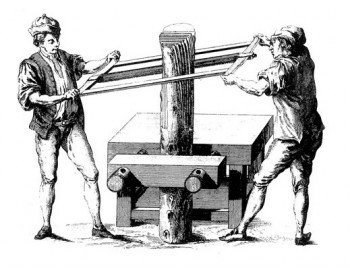 A veneer is any thin material applied to a thicker backing. It could refer to a brick veneer on the front of a timber framed house, a stone veneer on a concrete building, or a porcelain veneer for your teeth!

At Merenda we work mainly with wood, so our veneer is a solid piece of wood that is sliced very thin, usually around 0.6mm thick, which is then stuck to a thicker piece of manufactured board underneath.

The earliest veneer we have found dates to around 2400BC, with veneer being found in Egyptian Tombs. Intricate marquetry work has also been recovered from the first century Roman sites of Pompeii and Herculaneum. For most of its history, a large two-man frame saw was used to saw a log into thin strips to create a thick veneer. Because of this labour intensive process, veneer tended to be restricted to expensive marquetry pieces, typified by the inlay work of the 17th century European cabinet makers. In the early 19th century, Immanuel Nobel invented a rotary lathe that could cut the veneer directly off a log, making the process and materials much cheaper. 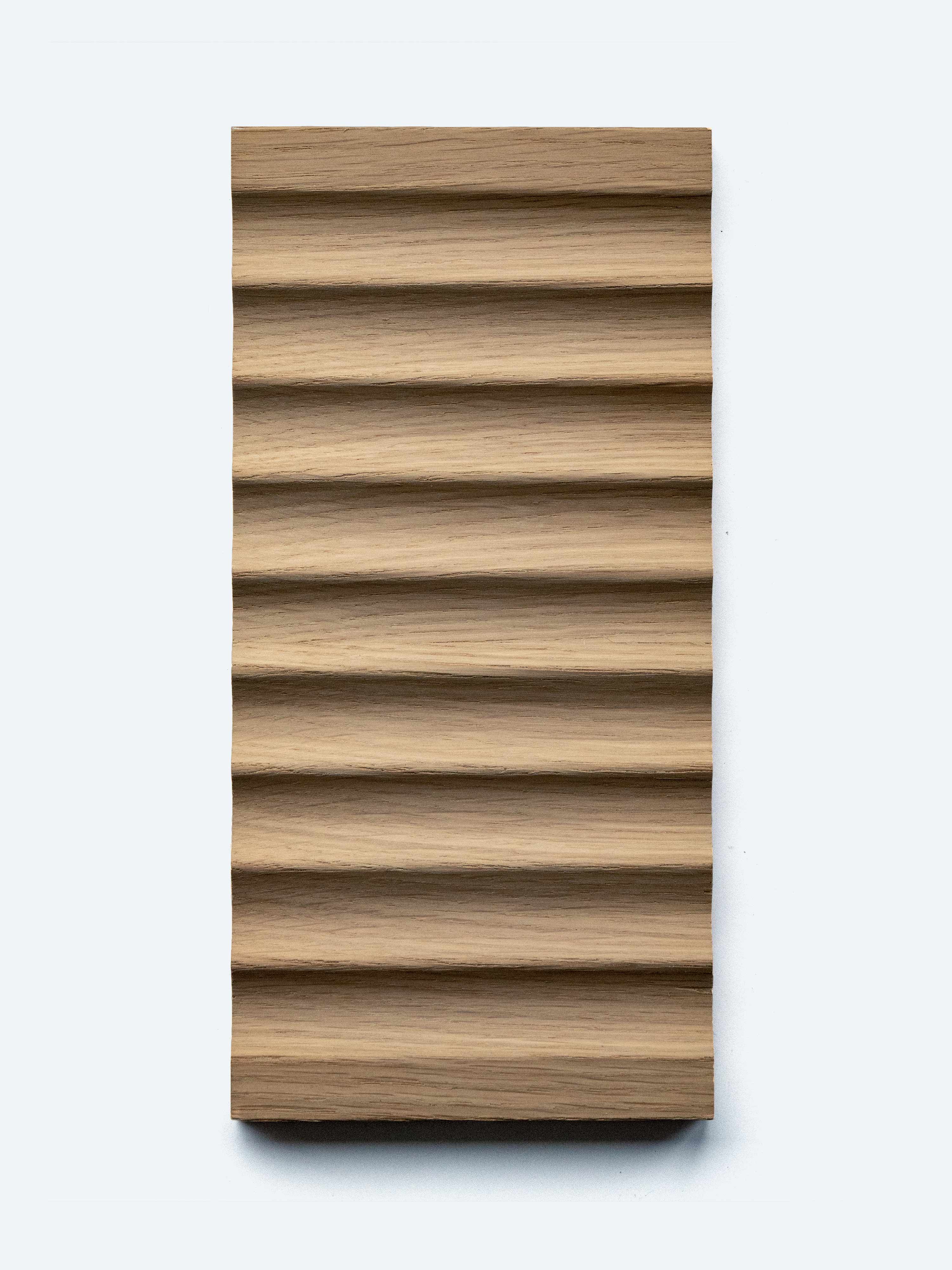 Once the logs are chosen they are debarked, and soaked or steamed to soften the wood. For veneer where speed is the goal, such as for plywood manufacture, the log is affixed to a lathe which spins it against the blade, peeling off long sheets. For veneer where the appearance is more important, the process is very similar, except the log is moved up and down against a giant blade that slices off thin sheets (like a mandolin in the kitchen slicing vegetables). Depending on how the log is orientated, you can achieve a different type of grain pattern. Flat slicing exposes the large cathedral patterns in the wood, where quarter slicing leaves long straight grain patterns, and in some species exposes the ray flecks.

This video shows how large sheets of veneer are made for the plywood industry.

Because veneer is made of solid wood, and being so thin it’s easy to cut. A pair of scissors or a craft knife and a ruler is enough to cut veneer cleanly and accurately. A veneer saw is a specialist tool for cutting veneer, with saw teeth facing in both directions to cut on the pull and push stroke.

For more complex work, we use a laser cutter to cleanly burn through the veneer, which leaves a really crisp and accurate edge. When veneering a large surface, we typically suggest leaving the veneer and the backing oversized, then trimming them all together after the veneer is glued on.

The trick the get a seamless surface on a board is in the proper preparation of the veneer. If you are veneering a wide board and need to stick multiple pieces of wood side by side, each edge needs to be carefully jointed to match its neighbour. If you are using a knife to cut the veneer, it creates a v shaped cut in the wood that matches the shape of the knife blade. Always cut on the backside, when you flip it over, this V groove is hidden on the underside and the joint comes together cleanly. When your joints are all tight, stretch some tape across the joints to pull them together. Getting veneer to stick down is simple, any glue that works with solid wood will work for veneer as well. Apply your glue to the thicker substrate and apply enough even pressure on top to keep it laying flat until the glue sets; for a small piece a scrap of plywood or MDF with some weights on top should be enough. 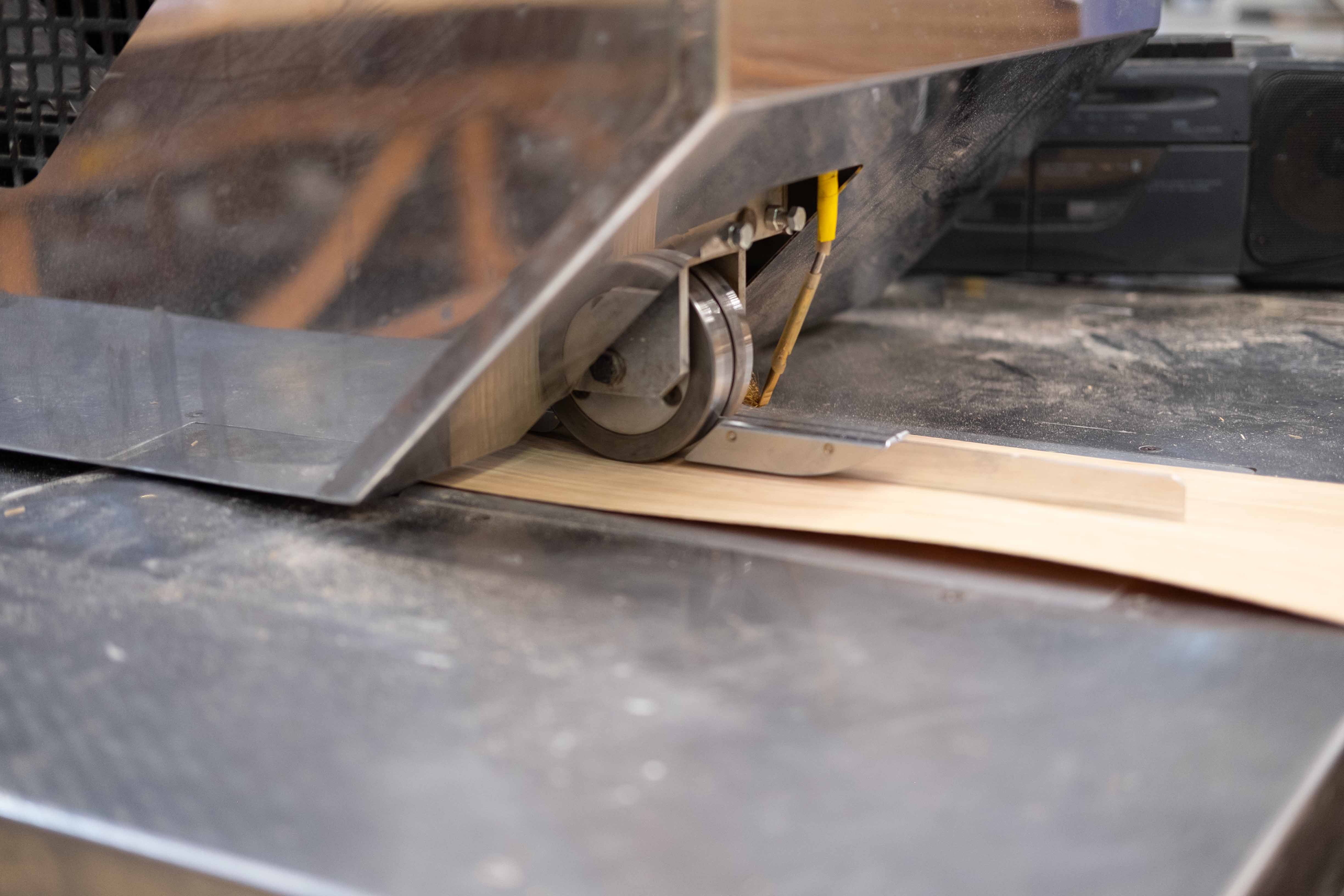 At Merenda, we have specialised tools for each of these processes. A guillotine cuts whole packs of veneer cleanly in one go, and our splicer applies a thin layer of glue to each edge and presses them together to create a wide continuous sheet of veneer called a layon. Our press then heats the glue and compresses the surface together, creating a workable veneered board in minutes.

So, that’s the What’s, When’s and How’s covered. Next time we will have a look at finishing your veneer, its durability, and its sustainability.

Check out our veneer edgebanding here.
See what else we do with veneer here.

And don't forget to follow us on social to see lot more.