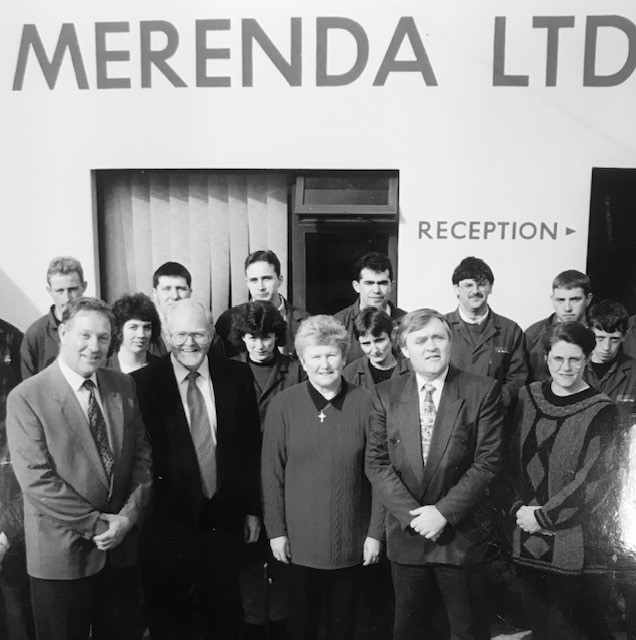 On the morning of the 5th November 1983, the sun rose with all its splendor over the beautiful Benbo Valley in north County Leitrim, Ireland, where the town of Manorhamilton is located. The town was its usual busy self when at approx. 10.30 am the phone rang in the offices of Wm. Haslette & Son, the town's main construction Company. The call was answered by the boss, the right man in the right place, at the right time.... a fact significantly verifiable today, 35 years later.

The new industry, resulting from that event, now sees its products in demand from destinations as far away as New Zealand. The town was to see a new factory with a flexible wood product opening in the town. It was significant that this was a very new product evolving from the world's oldest raw material... natural wood.

Manorhamilton's moment in history, when that telephone call was made in 1983 continues to blossom today. The boss man then was Oliver Haslette, the place was his furniture and joinery plant in the market yard in the town and the time was ripe with new possibilities. Traditionally the furniture element of the Haslette businesses used solid hardwood as their raw material in their School and Church furniture and Building Fit Outs.

White oak, Teak, Mahogany gave their work the high-quality finish for which they were well known. That telephone call put those hardwoods in a new perspective not under their radar before i.e. in a veneer format, a timber sheet material as thin as cardboard, brittle and totally inflexible. The challenge presented now was to make it flexible and capable of Multi-purpose use across the furniture world. This challenge had not been undertaken by anybody in Ireland before. That telephone call was a kickstart to encourage Oliver to delve into this idea which he had been investigating. He now saw potential to make it happen.

Flexible veneer was the new venture now unfolding. Making it happen was the challenge. The new Haslette company to undertake this was named Merenda Ltd. The questions confronting it was - How? Where? And When?

'How' meant trips to Germany, Spain and Italy to absorb the technology and machinery evolving out there on relevant similar developments, all very exciting and all very expensive.

'Where' needed surveying to decide where to best set up; a suitable and convenient local premises or site. Remarkably and ideally such was available in the town on the New Line; a street which linked directly to Enniskillen in the north and Sligo in the south. 'When' was now a reality consequent on that aforementioned phone call.

A strategic plan was set out and things began to move. The required elements of that new machinery saw their wheels begin to turn and new skills were fast being learned. Through 1985/ 86 the new product was performing well in furniture related factories in Ireland both North and South. A new timber discipline had definitely found its niche in Manorhamilton, and was making its mark.

To be Continued in next month's blog...